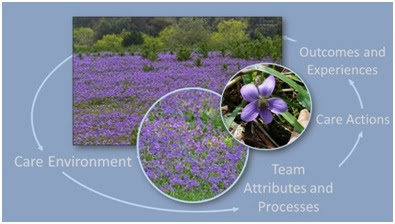 During our meeting we will explore three models that are useful for understanding collaborative care.


The Tidbits for the next three days will consider each model. However, tonight’s Tidbit emphasizes how all three models are similar. They are similar because they all consider care as happening in a context.

A visualization exercise may be helpful. For this exercise, imagine an ecosystem—let’s say trees in the distance, a meadow of green grass, and a field of purple flowers close by. In your mind, zoom out first and notice the soil, the water, the wind, the sunlight, and all the plants and wildlife in the ecosystem; next, zoom in a little and look at the meadow; finally, zoom in even more and look at just one flower.

If you want to grow some truly beautiful flowers, and hope to figure out how to do that, it would be wise, of course, to think about the entire ecosystem where the flowers are growing. To understand the flowers, you would want to consider many factors in an interrelated, ecological way, not just the flowers themselves.

The wisdom of the three models is that they all consider care from this kind of ecological perspective. The models help us see and account for the contexts that surround care, and how attributes of these contexts can be intentionally modified to improve care for all patients in that ecosystem. The models are hopeful like that—they were all developed to help make care even better.

The illustration attached with this Tidbit can help you think about this. Enjoy it, and take a minute to imagine your own care environment. Ask yourself, “What is our environment like when care is really great?” For the next three days we will consider answers to that question from the perspective of each model.

Posted by Collaborative Care Learning Network at 10:57 PM No comments:


Since today is a day of rest and renewal, here is a special Bonus Tidbit, just for you!

The link above is to a short video of Stravinsky conducting his wonderful orchestral masterpiece, The Firebird Suite.


The full version is also available if you want to enjoy that, too.

As you watch and listen, imagine that you are Stravinsky, and your collaborative care team, patients, and families are the orchestra!

Imagine that each of us is Stravinsky -- watching, listening, and leading together ("a pattern we know by heart")!


Posted by Collaborative Care Learning Network at 8:17 PM No comments:

Over the next several days the daily Tidbits will consider three models that are helpful for understanding collaborative care.

However, today is Sunday. We will start the harder work tomorrow. Today's Tidbit is easy.

Today's Tidbit is a quote from a patient at Concord Hospital. The quote says a lot about collaborative care and its connections of mutual support between professional health care team members, patients, and family members. The team at Concord considered this to be the highest compliment. The patient said...

Posted by Collaborative Care Learning Network at 7:54 PM No comments:


Preconference Tidbit #3 - What is Collaborative Care? 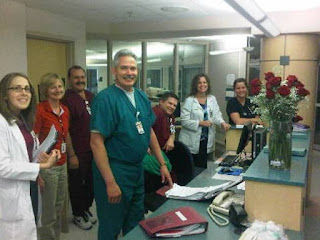 This Tidbit was written by Dan Jordan.

Dan is a physical therapy assistant from Wichita, Kansas. A former police officer, Dan is confident, warm, and outgoing. His participation and leadership were instrumental for implementing collaborative care on the cardiac surgery service at Wesley Medical Center in Wichita. The photo shows Dan and the cardiac team in the Cardiac Surgery ICU.

"Yes, there is one day that comes immediately to mind.

We usually make collaborative rounds every morning at 8:30. On this particular day I arrived as usual for rounds, but no one else from the team showed up. The medical director couldn't be there, the pharmacist couldn't be there, the care coordinator couldn't be there, and so on. I was the only one there with the nurses, patients and families who were expecting that collaborative care would happen.
I thought about it for a while, and decided just to go ahead and make collaborative rounds by myself. It worked out great. I introduced myself and invited each patient and family to introduce themselves like we always do, asked the patients about what mattered to them and about their goals and concerns, made sure everyone got a chance to talk, reviewed the plan from yesterday, ran the safety checklist, and made a new plan for the day that we wrote down together on the white board. I couldn't write orders, of course, but I pretty much knew what was going to happen because we have worked those things out together. Everyone was happy and it felt really good.
I think back on that day a lot. Nobody else was there but we did collaborative rounds! The irony is not lost on me, but it worked just fine!"
The interesting question of this Tidbit is, "What is collaborative care?" For Dan, collaborative care didn't require a room full of people. It was promises kept, and a pattern he knew by heart.

Posted by Collaborative Care Learning Network at 11:02 PM No comments:

"Tidbit #2" was written by Sean Garcia, an attending hospitalist in San Antonio. You will meet Sean at the meeting.

The idea of sending "Tidbits" began with Sean.
Sean wrote,

I have learned so much after this past month of Collaborative Care, it would be hard to share in just one e-mail, so I am going to share what I have learned in daily tidbits. Thank you for being there with me on this exciting journey!  It has not been easy, but no process of growth ever is.

Last week I had a huge revelation. It occurred after to me after we rounded on a patient. The whole team was present and the routine was followed. The patient’s daughter was present and the plan was relayed. Everything was smooth and almost rehearsed. All of the elements seemed to have been followed, just like clockwork. Sounds like a successful collaborative rounds, right? Wrong! Why? Because the plan was told to the patient and his daughter without much interaction. Many of the people in the room nodded in agreement but did not participate. Other people in the room had their hands crossed and appeared bored. The family asked questions of the intern, but only after everyone left the room. This was more of a higher level traditional rounds where the plan is decided in advance and relayed to the patient and family. By traditional rounding standards this encounter met a very high level, but missed the spirit of collaboration.


Contrast this with another patient who was telling us about her fears about having her leg amputated. Everyone in the room was moved by her story. An intern, who was not involved in her care, offered her sympathy and hope. Another intern offered her knowledge about prosthetics in injured veterans.  Many people in the room were moved to tears. The energy in the room was palpable. This was an example of true collaboration.


True collaboration occurs when everyone is present, there is no hierarchy, and ideas are freely solicited and expressed. Collaboration can generate creative ideas and provide powerful support. However, collaboration does not automatically happen by having all the right professionals in the room; it requires a functioning team. We have to think about how to foster this kind of teamwork.


I welcome your thoughts on this. 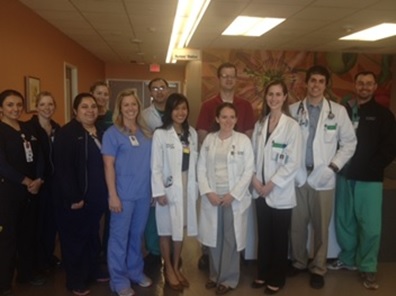 Each day leading up to the meeting you will receive a "Tidbit" about collaborative care.
The first "Tidbit" is a note from Kana Kornsawad, an attending hospitalist from San Antonio. You will meet Kana at the meeting.

While I was checking my email a few days ago, I saw a message from Andrew.  I thought, maybe just another request for a letter of reference for the residency application. Why me?, I wondered. Last I heard, he is applying for orthopedics.

Surprisingly, it was not what I thought.  Andrew has been nominated for the Gold Humanism Honor Society and he would like me to write him a letter of support. He said, “Dr. K, our experience on team 4 is what humanism in medicine is all about.” That brought tears in my eyes.

He told the story of one of the patients who passed away during our collaborative care.  One of his statements was, "I learned a great deal about what it means to be a doctor during this experience.  I saw the importance of compassion, respect, and empathy, while working tirelessly to provide the highest quality of care to patients."

I kept reading that sentence and thinking back about a few months ago when we were discussing how the model would impact the learners. I still don't have the clear answer but I do know one thing.  This model has created an environment for the learner to be able to learn the heart of medicine....humanity, compassion, and empathy as I read through Andrew's personal statement.

Another surprise phone call came from Anne Louise this evening.  “Hi Dr. K, how are you? Can I ask you for a favor?” I said yes. "Would you mind be my faculty advisor on an assay that I am working on to submit to ACP?" I said, "of course."  The prompt was "Team Care" she said.

I started laughing. I knew what was coming next.  She said, "This prompt is begging me to write something about collaborative care."  I smiled to myself...co-incident!  Two of the students on collaborative care were telling me the same thing. They told me that their time on team 4 was one of the most memorable learning experiences for them throughout medical school.

Besides increasing patient satisfaction, delivering the best care to the patients, building great relationships, and decreasing length of stay, one more thing to add to the list of collaborative care outcomes is...it has created at least two outstanding physicians who will be the future of medicine.